Dear Foristas, I am grateful in advance for some collaboration with this LEADER 4081 analog oscilloscope equal to the KENWOOD CS-5135. With failures with the brightness control, I have the service manual.
Initially, when it was turned on, it took time to appear the stroke and when it appeared in 10 or 15 minutes, it did not let the brightness control.
Initially, the operating voltages were checked, being all normal, note that when starting the ignition did not show high voltage, the high voltage section was checked and an isolated high-speed diode was found at one of the ends due to oxidation, in the Inten adjust circuit consisting of VR401, coming into operation correctly.
The surprise came after armed and covered when a light was heard when a diode or resistance was broken, leaving the oscilloscope with excess brightness in the stroke and without intensity control this does not work.
The X74-1490-00 card was checked thoroughly to see if something burst or burned I want to emphasize that no burning smell was felt, everything being in normal condition.
Diode by diode, resistance by resistance, transistor by transistor, capacitors all manually with the ohmmeter were checked in detail, making different tests to verify the optimal state of each component, finding everything normal including the pot that controls the Focus intensity and astigmatism.
The approach works normal and astigmatism control. It just does not control the brightness or intensity. Attached scheme and photo of the failure presented.
I reiterate thanks for any suggestions. 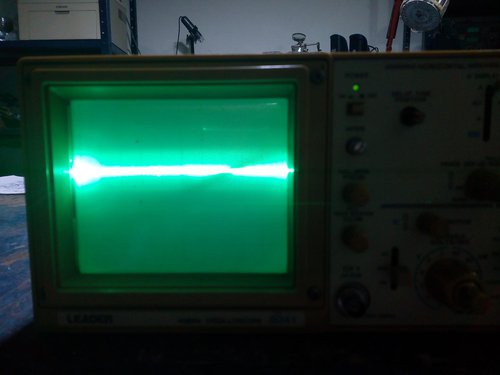 You forgot to upload the schematic. Do you use a translator because there are some very strange sentences ? That will make communicating a lot harder for a scope repair.

If a trace (stroke ? ) is max bright there is often something wrong in the high voltage section. A variable high voltage on a connection of the CRT is what controls the flow of electrons. If the high voltage is outside the range the trace will be fixed at max.

Check the voltage on the slider connection of the intensity potentiometer. Does it react or is it fixed. If it reacts and if is it within the specified range is needed to know if that works like it should (schematic will state this or you must calculate it from the resistor values used) And from there you go on (that is how I do it)

Sure one or more of the Hi-ohmic resistors has gone to the eternal hunting grounds. That's common in aged scopes like this. You can check them out of circuit with a decent Ohmmeter. 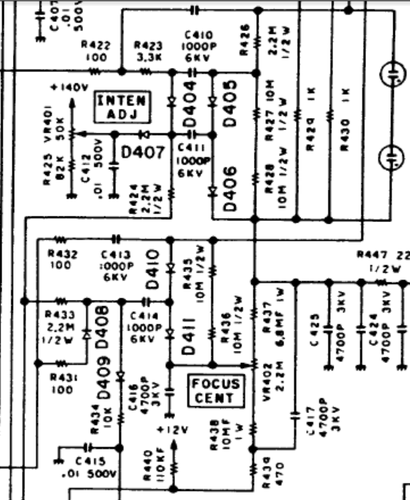 Dear Fred101, I am using Translator, but I understood the answer.
I did not upload the manual because the server did not allow it because it is very large.
The VR401 control of inten adju is working in its central branch from 75 to 140V, considered normal.
As for my dear Raff12 in that section, each of the resistors, diodes, capacitors of the whole stage was measured outside the circuit.
Thank you both for answering.

You can use WeTransfer to send large files. Fill two times your own email-adress and post the received link from WeTransfer here.

it took time to appear the stroke and when it appeared in 10 or 15 minutes, it did not let the brightness control.

That's a long RC time.. Did you measure the control voltages directly on the tube connector? That's the way to test the CRT. 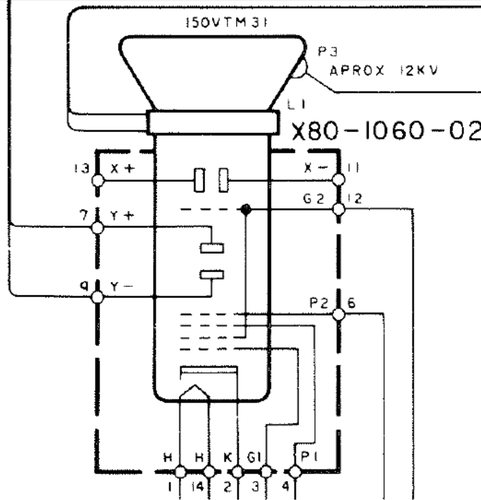 These were the voltages taken with 10Meghomios probe, none presents changes when operating the intensity control and neither VR401. All negative voltajes.. Unable to conclude anything
K = -825V
G1 = -703V
P1 o G3 = -702V

The CRT is a tube. Voltages on the CRT are all referenced to each other. The intensity voltage must be a certain value range but that only works if the cathode voltage is correct. You need to measure that with a HV probe (they are not 10M unless the manual states something else you need a HV probe. These are high impedance points). If you measure the voltage over a 2M resistor, you place a 10M resistor (the DMM) parallel. This gives pretty big faults.

You now know the intensity potentiometer works. If the cathode voltage is correct the intensity should change. If not, there is something wrong with the parts in between or the CRT itself. Those high resistance resistors and caps can measure good with a normal DMM but have to much leakage under a high voltage.

You can check for shorts in the tube itself bij measure the internal resistance, especially between filament and Wehnelt cylinder and also check the grids for any short circuits, with connector removed from the tube. There are a lot of used tubes on eBay if your tube is broken. But it's better first check the variable voltages like focus/intensity also with the CRT tube disconnected.
The voltages *must* really changes if you turn the potentiometers!!! You don't need any expensive measuring machine's for this simple analog thing, the biggest effort is to have some experience as a troubleshooter.

ps. I search in my old black Muiderkring 1966 tube handbook, it has a lot of CRT's but not that type, it's too new. Then I try to Google the tube but with no luck. I was searching for the cutoff voltage. That's good to know for investigation. But I find no tube manufacturer specifications at all. Good luck to Troubleshooter 1.0

Yes sir, they were taken out of the circuit, they were tested several times to check their status and they were exchanged for others, we think that the fault is possibly in the short CRT tube.