+++++++++
Rather than just leave this topic with my anecdote. I thought I could elaborate a little, with some help from an old gent with whom I have become acquainted over the last couple of months. The chap in question, George, after college and national service started work for Mullard at Mitcham in the late 1950's. He continued working within the Philips group throughout the next twenty years. Today, my good Lady and I had to take my old Mum to Norwich hospital for an appointment, and as we were going to be passing quite close by his new home, we called in to black our beaks, so to speak, and wish him and his Lady wife a happy new year. While we were there, I thought of bringing this topic up with him to see if he could shed any light on it, and illuminate it he did! On the subject of the TO-7 he said that at the design stage it was not even known that the phenomenon of tin whiskers even existed, and it was thought that the problem was due to not enough protection putty being used at the assembly stage, allowing contamination to get to the semiconductor. Adding more putty to bed the germanium in and raising the height of the glass seal "pips" that the leadout wires passed through apparently helped, but not for the reason assumed. The modification did not cure the fault as the dispensed volume of protective putty could not be controlled precisely enough, allowing the "whiskers" easy passage to the interconnecting wires via voids in the putty. the cure was only found when the real problem was discovered and lead was added to the plating, as reported by Mark Hennessy in his article on the subject. http://www.markhennessy.co.uk/articles/v....htm#treat . By the time the cure was found, the production life of the AF-114 through AF-118 was nearly at an end, a great shame because for their time they were remarkable transistors. My informant stated his opinion that the aluminium oxide that was added to the protective putty was the cause of the phenomenon, but as the foil had been found he said the organisation wouldn't fund further research.

Now the LOCKFIT package. George was personally involved in this one, he claims and made himself very unpopular with the "upstairs boys" over it too! He said if you break open a faulty early version of the lockfit package, you will (under a magnifier if your eyesight is as good as mine), most probably see one of the problems with them , moisture ingress, the phosphor-bronze (?) interconnections will be tarnished. He went on to say that there was pretty much nothing right with the way this package was designed, firstly the silicon was bonded to the collector connection, then that and the base and emitter connections were bonded to the flat back of the package, the base and emitter connections were made and the rest of the package was molded on that with an epoxy/inert filler mixture. The problems were, the flat leadouts were not prepared very well for bonding and therefore made for poor sealing allowing moisture ingress and slow but steady contamination of the transistor. Next, because the transistor was surrounded by the epoxy, it had to be quite soft, i.e. mostly filler, and apparently had the properties of a bath sponge! The other problem with this George said, was because the silicon was imbedded, the fine interconnections would fracture at manufacture (a poet but does n't knowet!) but stay in contact at first, but the contact becoming more unstable as the device was used, eventually becoming very noisy, or failing completely. The team of which George was a member, were tasked with the job of improving the manufacturing of this package, and he said what they came up with was sintering the leadouts to bond better with the package, making a void for the silicon to sit in, to stop the fractured connections, and finally to use a "hard epoxy". Their proposals were all initially rejected on the basis of cost to re-tool, the company saying that they had been designed for consumer electronics and would last decades in a domestic setting, a fair and accurate assesment for the most part, (unless you keep your portable radio in the potting shed?!) a slanging match ensued, with two of the team leaving their jobs to go to work with BEL in the U.S. (from frying pan to skillet?), although the modifications were later adopted. George was also later sacked for conflict of interest, as through the sixties and most of the seventies, until Philips management found out, he had also been running a T.V & RADIO repair business with the help of his wife and brother, the energy of some people. George is unfortunately now almost blind, but still loves to chat about the old times and has agreed to let me do some audio recordings of his memories . I was unpopular with my folks over our long conversation, but it is so rare to actually meet someone who was actually there at such an interesting point in history. When we arrived home I fished an old BC148 out of the bin, that came from a noise infested Fidelity (a quite distinct intermittent low rumble), and squeezed it with a pair of cutters, it fell apart showing me the back of the connections inside the transistor, the position of the silicon on the other side of the collector is marked with the blue dot in the attached picture, and the tarnish is plainly visible. Best Regards. Andy.

By the time the cure was found, the production life of the AF-114 through AF-118 was nearly at an end, a great shame because for their time they were remarkable transistors. 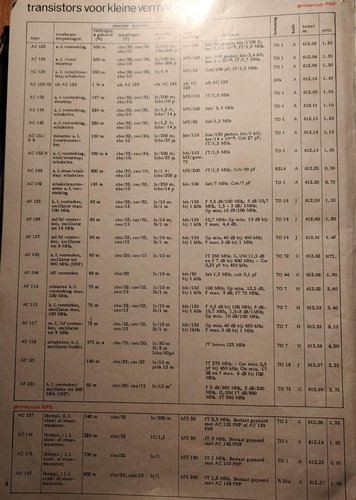